Our gym has been open for three months already and 99% of our clients came here “to lose weight.” No one has managed to do it yet, and they all queue in front of my office to ask me, a fitness-consultant, one single question: Why can’t I lose weight?

If we talk about “losing weight” as “burning fat”, then we need to take into account three factors: gender, age and fat itself. Roughly speaking, firstly, males gain and lose weight in a different way to females. Second, females burning fat “before” and “after” 26 years old are two completely different stories. Third, “fat” in our body is not one single substance: there are many types of fat and they “burn” in a different way. That’s why there is a constant confusion about how to “burn fat”: literally, clients don’t understand what they “burn” and how.

A person who wants to lose weight needs to understand one thing first: the accumulation of fat and its utilisation depends on: physical activity – 5% (energy expenditure or “burning calories”), diet – 10% (the regulation of a caloric intake), and body’s hormonal function – 200%. The second crucial factor is that sweating whilst exercising has nothing to do with burning fat. That’s why “a weight loss belt” is nothing more than a toy for masochists.

One more time, for those who haven’t heard it yet: the role of hormones in the accumulation of fat and the burning of fat is disproportionately high in comparison to the role of diets and fitness. Belts and plastic wraps for losing weight are a successful rip off for losers.

By the way, some women come to this conclusion empirically: by strenuously working out in a gym and being on a deadly diet, they have “burnt” 10 kilos. After that a female would invite a male for “a shot of coffee”, and 30 minutes prior she would take a contraceptive hormonal pill. In a month, she would have to burn already 30 kilos as hormones are unforgivably effective! In regard to boys, if a champ aged “after 40” decided to lose weight, he would have to start with a blood test to check testosterone, LH, FSH, etc. Otherwise even if you “sweat yourself to death” running on a treadmill, you won’t achieve the result. I feel sad to disappoint you, but this is a bitter truth of life. If you don’t like it, don’t believe it. And if you can’t stop believing in the effectiveness of a treadmill, there is no need to read on. 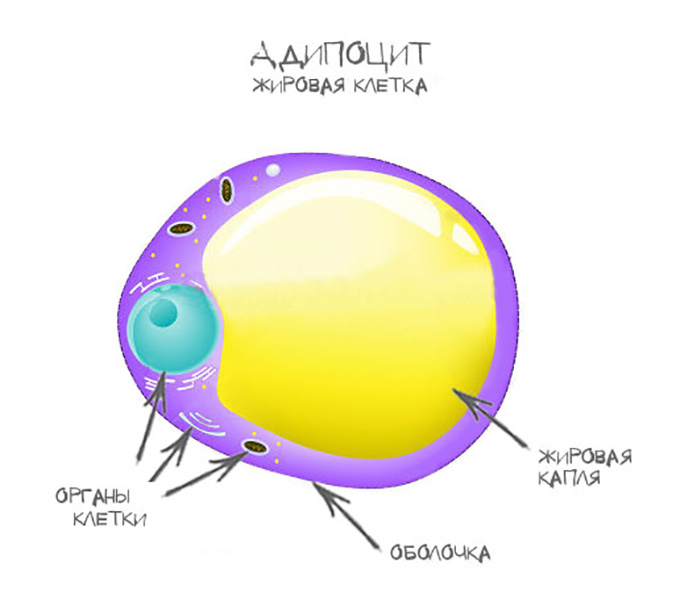 Basically, this is how it goes: by walking on a treadmill or climbing onto a bicycle, we want to burn “belly” fat, but in reality we burn it at a completely different place and unfortunately, that belly fat doesn’t burn at all, why? Simply because it is packaged in a “safe”, a fat depot, adipocytes, to be used only in the emergency under the effect of special substances – hormones. Nothing, apart from hormones, is able to “store” fat in the depot and extract fat from it.

First of all, let’s figure out how fat accumulation occurs, and then we will try to understand the “burning” process.

So, semi-fluid fat accumulated and stored in adipose cells is represented mainly by triglycerides and esters of cholesterol. Fats in fat tissue are accumulated as a result of three processes:

In other words, without insulin’s “permission”, no fat can get into “the depot” on thighs and belly. No matter what you eat or how long you lie on a couch, fat won’t appear on your belly unless insulin gives it permission.

Now about “the opposite” process – burning fat.

1.    The form of a molecule has to be physically changed in order for fat to exit the “adipose cells depot” by going through a membrane into the bloodstream.
2.    Then fat needs to be physically changed again for it to become “fuel”, because fat stored in the fat cell doesn’t burn at all, because of its natural form.
3.    To “burn” fat, we need to put it in the “oven”, i.e. fat has to be delivered to a muscle cell and somehow, miraculously, it has to be squeezed into mitochondria (L-carnitin does precisely that).
4.    We need to give the mitochondria a signal to “burn” fat in an oxygen fire. Physical exercise is one way of doing it. Not any exercise, of course. And, by the way, it doesn’t have to be extremely exhausting. 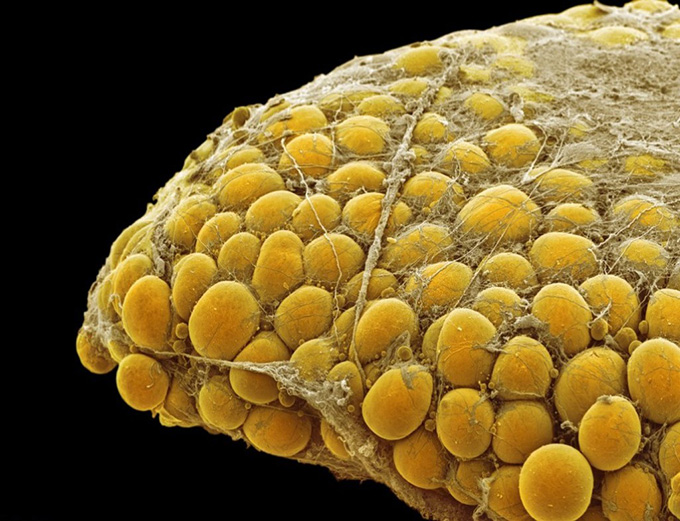 Moving forward… Tissue lipase catalyses the mobilisation (lipolysis, breakdown) of deposited triacylglycerol. Adrenaline and glucagon activate lipase. Roughly speaking, adrenalin is released in response to positive stress (skydiving or sex with your loved one), and glucagon is released in response to negative stress (for example, fear, fight or flight response, or hunger). As a result, fats break down into glycerol and free fatty acids. Then glycerine (glycerol), a substance dissolved in plasma, is transported into the liver, where it is used in the reactions of gluconeogenesis, meaning that carbohydrates are generated from it. These carbohydrates then provide energy for other processes in our body. The bloodstream carries fatty acids in the form of serum protein complexes (albumin) to different organs and tissues, where they get involved in the process of oxidation, i.e. they are “burning”.

By the way, adrenaline and glucagon also activate lipolysis in adipose tissue by means of phosphorylation. Fatty acids synthesis stops because of that, and the mobilisation of triacylglycerol stores begin, and so does fatty acid oxidation and synthesis of ketone bodies, i.e. the processes that deliver energy substances to cells kick in.

In other words, earlier accumulated fats can’t be released from depots, nor will they burn without the permission of stress hormones  (adrenaline and glucagon). Well, does it make sense now why a treadmill doesn’t help you lose weight? You can burn a little bit of fat on the treadmill (after two hours of non-stop walking or jogging), but this fat is not the same as the fat on your thighs and belly…

It has recently been discovered that a new hormone named irisin is secreted from muscle cells. It stimulates the regeneration of adipose tissue: the cells of white adipose tissue are converted into the cells of brown adipose tissue under the effect of the hormone. As a result, it causes a reduction in body weight and blood glucose level without having to diet or alter physical activity levels. It has only been tested on mice so far, but imagine what would happen if magical irisin pills were available for people?! The fitness industry would crash in no time…

Here I will summarise the theoretical part:

1.    There are many different fats in our body; each of them accumulates and “burns” in a different way, so there can’t be a single “war plan” against every single one of them!
2.    The belly and thigh fat that we hate so much is accumulated neither because of eaten fat, nor because of mythical calories. Only the great and powerful Hormone Insulin can decide whether to store fat in the depository or force it to build the brain and body cells.
3.    Accumulated belly fat won’t exit the depository because of running, exercising with dumbbells or being on a diet. Only hormones, adrenaline and glucagon can tell fat, “Off you go!” Testosterone. commands, “Burn!” Somatotropic Hormone overns all these hormones —  it is a king of all anabolic hormones…
4.    A magical potion “L-Carnitine” is not able to “burn” fat: carnitine gets involved only at the very last stage, when you have to drag a fat molecule, like a wagon, into the mitochondria, where so-called “burning” occurs…. well, actually it is called oxidation.

We worked out the theory. Now we have to understand what to do in practice: where to run, how much to lift and how to starve. You will find out about all of these… in the next article.